Reflections on The Demolition Project at the Leeds Compass Festival 2018. 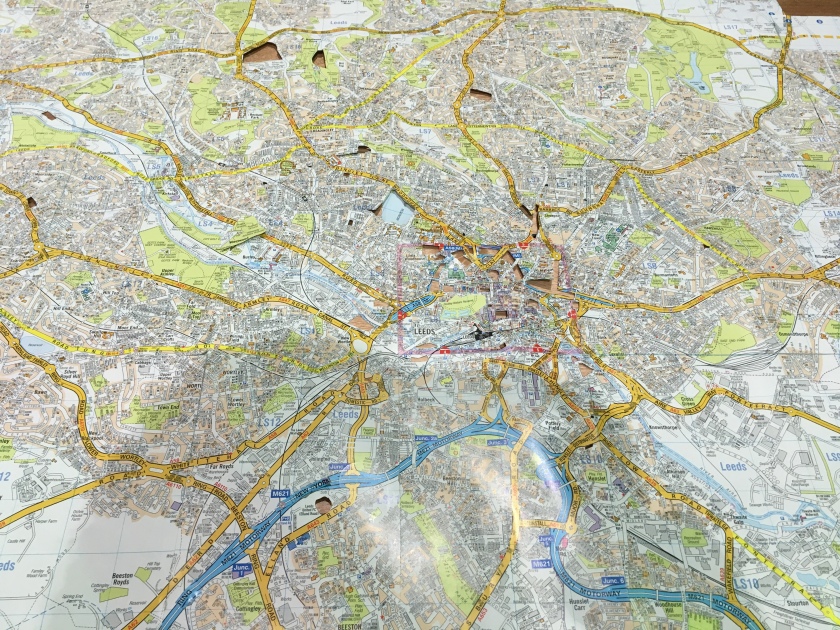 I found myself thinking about the time I first arrived at the house in Headingley. It was late afternoon in mid-summer. I’d been stuck inside the car for hours as we travelled north. As we weaved our way along the lines of tatty student dwellings, which stood like a motley identity parade, I felt relieved to be there after such a long drive. That house became my sort-of-home for a while, but I didn’t want to be living there. It was chaotic and unkempt, a transitory place.

I hadn’t expected to suddenly be reminded of it almost twenty years later when sat in a draughty market hall. I felt a pang of something in my stomach, something familiar, nerves perhaps? Possibly regret. Whatever it was, it was unexpectedly raw. I hated that house. I looked at the map of Leeds and I wanted rid of it, that was my instinct, to take it away.

This was my reaction as I visited The Demolition Project as part of the 2018 Compass Festival. A collaboration between artist and photographer Alisa Oleva and writer-performer Debbie Kent, the project invited people to reshape Leeds with a few simple tools – a map, a scalpel and their imagination. It posed a simple question, what would it be like if ordinary people had the chance to transform their city instead of politicians or big corporations?

Over the space of two days people were invited to transform their city. In return, the artists asked that participants gave a reason for their change by writing it on a sticky note. There were no rules on what you could cut or change, no restriction on the reasons given.

The event took place in Leeds Kirkgate Market, amongst the hustle and bustle of the city. The biennial Compass Festival aims to bring immersive art into the heart of the community through interactive encounters. By placing this in a familiar public place it became a truly democratic process. It wasn’t hidden in the safe space of an art gallery with an audience already familiar with the script of immersive art. Anyone could pass by, be intrigued and step inside.

Oleva and Kent aimed to open a dialogue about urban spaces and how we define and reimagine our city and live in it. Every transformation of a city begins with the loss of something, another building perhaps or the filling of an empty plot.

I arrived on day two of the project. The image had evolved, with holes punctured as parts had been wiped from the map. There was a blank strip where the Ring Road used to be, the airport had been moved into the centre of town. That was one of the most fascinating aspects for me, the logical movement of places. I expected gleeful demolition, but the careful consideration given to the placement of things was inspiring. Students had moved all the buildings they needed closer together. But Rodley Nature Reserve had been moved from the outskirts to the centre of town for all to enjoy. There was clear logic on display, and some wonderfully creative choices.

The true beauty of the work was revealed when you looked at the sticky notes on the nearby wall. These captured the reasons people had given for their decisions and gave meaning to the gaps created in the map. There were social comments too, removing the glitzy casino for example, or the bland city centre apartments. Another participant had taken away one of the shopping centres as ‘it’s good, but I’m too lazy to work there (I put it in the river).’

But there were several personal and thought-provoking reasons for changes too. The removal of an area of rough parkland near the university because young women felt unsafe walking through it at night. Someone had demolished their childhood home to erase the bad memories it created for their mum. I wanted to explore those anonymous stories further.

When I looked on the map for the area where my old house was, I noticed there was already a hole very close by. I consulted the handwritten notes on the wall. They’d taken another house in that street because it was ‘a cold, damp and dirty house. I love the people who used to live here but have always hated the building. It now gives me the shivers when I pass it.’

It was as if that person had reached into my own memory bank, and I felt a connection. That’s why The Demolition Project worked so well, it provided a platform for a shared understanding of our city and our hopes of making things better.